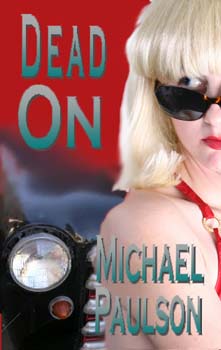 Copyright 2006 by Michael W. Paulson, all rights reserved. The characters, places, and events in this book are fictitious or used fictitiously. Any resemblance to real people, places, or events is coincidental.

This is the first chapter only. To buy the entire eNovel (price is only $3.99), click the Buy Now button. Available in HTML, PDF, Palm Reader, Aportis (Palm) Reader, and Microsoft Reader formats

He was standing in McAllen's air terminal; slack-jawed and dewy-eyed, holding a cardboard sign with my name scrawled in red crayon. Behind him, a loudspeaker droned a speech from the mayor, Philip Woods. His honor was up for reelection and promising to get tough on crime, no matter the cost, or implications. It was a promise each voter could cling to in hopes of a better, safer tomorrow. It was also a promise the Mayor would have trouble keeping. Because in Texas, when it came to crime, implications always run deeper than expected.

I stopped in front of the sign-holder and jabbed the cardboard with my finger. In response, his wet brown eyes flickered into focus. They drifted from my face to my shoulders to my shoes, and then back to my face; as if not certain I was real.

"You the detective?" he asked, dully. His face was like a vacant lot. His softly spoken words coming slow and painfully, like work from a man shortchanged for his labors. "You Deacon Bishop?"

I could smell gin on his breath and the rancid sweat clinging to his oozing pores. "Naw," I replied, fanning the air in front of my face. "I flew here from Dallas because I have this thing for cardboard."

My presence in McAllen related to a request from Eli Huggins; a businessman reputedly rich enough to start his own country. The poor soul in front of me looked like he would have trouble buying a cup of coffee without getting a donation.

"I hope to god you're not Eli Huggins!" I blurted, as the memory of his expense check bounced around in my head.

"Eli's my brother," the sign-holder said. He let the cardboard slip from his big fingers, to the floor. "I'm, Leon."

Leon Huggins was well past middle age, short and wiry. What I could see of his body had a lot of hair; gray on his head and three-day beard, black on the backs of his hands and arms. His sunburned face was crisscrossed with deep crags. He had old scars above his eyes, along the ridgeline of his cheeks, and across the bridge of his flattened nose; markers, prizefighters got for winning second place.

"Eli sent me," he continued, rubbing his flattened knuckles. "He's waitin' on you back home."

A dim light came on in my head as I eyed Leon's dirty T-shirt, big hands and baggy jeans. "Leon Huggins," I grunted. "Boxer, welterweight. Maybe twenty or twenty-five years back, right? A real contender."

His bushy gray eyebrows shot up forcing the skin above into deep furrows. Then he grinned at me showing a mouthful of decay-blackened teeth. "You got a memory, Mister."

"I laid five hundred clams on your last bout, Sweets," I gritted. "You took a dive to a nobody by the name of Johnny Paean. Five hundred was a chunk of change, back then! And, it took a lot of sweat to get. That's the reason for memory."

The boxer's grin twisted into a savage growl, "Never tanked, no how."

I jabbed my forefinger into the middle of his hard chest. "Naw," I gritted. "You kissed the mat 'cause it felt good."

He stiffened toward me like a pit-bull ready to charge; his hands clenched into meaty clubs; his voice hissing, "Best keep shut, Mister."

I had lost bets that size a hundred times or more over the years, without batting an eye. Nevertheless, that particular wager was now a red-hot poker twisting my guts: one that would not quit until I got satisfaction.

"Third round," I remembered. "Paean tossed a jab followed by a half-hearted combination. You took the blows and folded like a limp dick."

I coiled my fingers and set myself. "I'll settle for a piece of your hide."

A black scowl contorted the boxer's face. He muttered a curse and quickly cocked one arm, ready to swing. I gave him a hard stare, and waited. Seconds ticked. Eyes locked. Breathing stopped. Finally, Leon relaxed and let his arms drop to his sides. I started breathing, again--disappointed and relieved.

"Memory ain't good," he grunted. Leon shook his shoulders back to relax the muscles, and then retreated a step. "Not clear on what's what some times. And that goes back some. Maybe I got things crossed. Maybe you did, too."

I splay my fingers to get the blood flowing back into them. "Not, likely Sweets."

His stubbly chin drooped to his chest as if he were a small boy caught dipping into a cookie jar. Then, he stuffed his big hands into his jeans-pockets and stared down at his ragged running shoes, completely defeated.

A wave of pity swept over me and I felt very small and petty. "I'll get my grip," I muttered, and headed for the luggage carousel.

Twenty minutes later, I was on the parking ramp's top deck, gasping hot air as I followed Leon across the sizzling concrete. "Eli was supposed to get me," I called to his back. "What happened?"

I trailed along feeling like a Popsicle tied to the business end of a blowtorch. "I hope to god the air in your truck's working. It must be a hundred in the shade."

"Hundred-ten!" Leon said proudly over his shoulder, as if he were responsible for the heat. "Them temps make my bones feel young." Then he tossed me an apologetic backward glance before adding, "Truck got no air but windows, Mister."

Under my breath I sighed, "It probably doesn't come with a low-moral, blonde either."

He stopped behind a 40's vintage pickup and gave me a feeble grin. The pearl-black paint on the old truck glistened like molten tar. And the chrome glinted like it had been dusted with diamonds.

"Ain't she somethin'?" Leon asked. One of his big hands reached out and stroked a fender like it was a woman's thigh. "All I got. Only thing's really mine."

He walked the length of the vehicle and back, staring at it as if the truck were alive and awaiting his attentions. I watched and wilted, still worrying about Eli's check.

"Twenty-five coats," he continued. "Me and my daughter Betsy polished her up, in between. Glows like love, don't she? I call her Moira--after my wife."

I wiped the sweat from my face with a handkerchief. Then I grimaced as a gust of wind brought his stench to my nose. "Married a mouth-breather, did you?"

Leon rubbed at an invisible spec of dust on the truck's chrome license-plate holder. Then, slowly, his eyes rose to meet mine. "You're clear on Johnny Paean," he said quietly. He nodded as if reaffirming the long-past transgression. "Tanked, all right: deep as it'd go." He spat on the concrete, as if the admission had fouled his mouth. "Weren't my call. Never's, my call! Not, then. Not, now."

I set my suitcase into the truck-bed, took off my suit-coat and draped the sweat-dampened garment over one arm. "Even the Pope has options, Leon."

He gave me a grin. "I'm good for the five-hundred, Mister. You'll see."

I let my gaze wander over the poor slob. If he had two quarters in his pockets, they belonged to somebody else. "How much did you get for throwing that fight?"

His grin faded. Then he moved to the driver's door and opened it. "Nothin'," he murmured. "I never got nothin'. Eli's got them angles."

He crawled into the truck's cab and settled behind the steering wheel. I got in on the rider's side and immediately wished I was somewhere else. The pickup smelled of gasoline, and Leon. I rolled down the side window and prayed for a clean, cool breeze.

I hope you enjoyed the opening chapter of DEAD ON by Michael Paulson. You can buy the entire book now, for only $3.99 (available in HTML, Microsoft Reader, eReader/Palm Reader, Mobipocket, Sony Reader LRF, ePub, and Adobe Acrobat PDF formats) by clicking the Buy Now button::