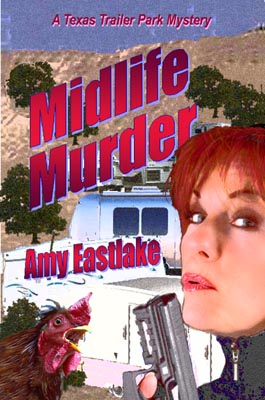 Special thanks to Karen Leabo and Rebecca Russell who gave extensive comments on earlier versions of this work. Unfortunately, the author cannot blame them for any remaining problems

"The newly elected chairwoman of the North Texas Republican Women's League is" Secretary Debbie Smith took a long pause, fumbling with the envelope as if there were any suspense at all.

She widened her eyes. "Oh my gosh, the winner is Kayla Switzer. Congratulations, Kayla."

I'd heaved myself halfway out of my seat to acknowledge what should have been a routine confirmation vote when the name penetrated--it was the wrong name. It was supposed to be Heather Montag. Kayla Switzer? That woman was barely in her thirties and had joined the League only two years before. No way could she have beaten me.

I reminded myself to be a good sport and pasted on my brave face, pretending I'd stood to congratulate the woman who'd stolen the post I'd held for the previous five years--years during which time I'd increased fund-raising by over a thousand percent, tripled membership, and seen the League become a major force in Texas politics.

If the membership wanted Kayla, I could deal with that. I'd just invite Kayla to the afternoon tea I'd ordered catered at my nearby home and show her the kind of graciousness so important for any woman, especially a woman in a leadership position.

Right about then, Kayla blew me off to accept congratulations from her cronies and from the women I had counted as friends was worse.

Carrying an extra fifty or so pounds left me perennially short of breath, but it did mean I could bull through a crowd. I pushed my way through the fawning masses and tapped Kayla on her shoulder. "Congratulations, Kayla."

"Oh, Heather," Kayla cooed. "I just know I can count on you as we move forward. I'm hoping you'll take an important role in my cabinet."

I relaxed just a little. They hadn't forgotten me, didn't want to dispense with all of the talent and energy I brought to the League. "Well, I think I'd be a good fundraising Chair."

Kayla pushed her silicone-enhanced breasts forward like twin rockets and giggled. Unlike most of the other members, she worked full time, but she managed to steal away from her law firm to make just about every meeting. Her deep suntan and slender figure hinted she might also slip away for workouts at the gym--something I never seemed to have time for myself.

"I'm so sorry, Heather, 'cause I promised that spot to Lisa. I was thinking you'd be great for refreshments. You always seem to know the right food and drink."

Refreshments? That wasn't a cabinet post--it was the job given to newbies who needed to prove they would stick with the organization.

"Do that," Kayla said, her gaze slowly traversing my bulk. "And let me know as soon as you can. I know you're good with food."

Sandy Rachel, who'd been second in command in the League for years, laughed at the new chairwoman's slam as I stumbled back, swallowing hard to hold back my tears. When I'd joined the League a decade before, we'd had consisted of five women and an aging poodle. I'd thrown myself into the League, served every position, including refreshments chair, and turned it into a fund-raising force. Until five minutes earlier, I'd considered every single member among my closest friends.

Leslie James, one of the new members tugged on my sleeve. "I'm so sorry," she whispered. I noticed, though, that she didn't meet my eyes, as if being caught talking to me would contaminate her. Still, she gave me hope. I could come back, regain my friends.

Maybe I'd sacrificed too much for the League. Although my father's money had funded my husband Martin's startup years before, Montag Industries was Martin's baby and he made sure I knew it. I arranged the annual Christmas party and helped introduce new executive's wives to Dallas society, but that was about it. Since that didn't take much of my time, I'd made the League my deal and I'd lived for it.

If I did say so, I'd done good for the organization. I'd personally recruited just about every member. I'd hit Martin up for contributions, and I'd built a network of donors that made North Texas a required stop on the political circuit. Even if they had wanted a chance, I found it even harder to believe that anyone in the organization would blow me off.

Even if they didn't understand the way donor networks work, they knew Martin and the other executives at Montag Industries contributed millions to NTWRL every year. There was no way these women would throw that kind of money away. Yet they didn't seem worried that I'd suggest that Martin shift his political contributions to another branch of the party.

What did they know that I didn't?

I pasted back on my smile, mingled with the others in the country club banquet room, and thanked everyone who'd meet my gaze for their support--even though I knew many of them had stabbed me in the back.

I couldn't help jotting down a few names in my iPhone. So-called friends had promised me their support, then they'd turned around and given their votes to Kayla. A good third of those women had husbands who worked for Montag Industries. I wouldn't tell Martin how to run his company, but I could let him know that some of his executives' wives couldn't be trusted.

For once, I wasn't the last to leave the meeting--but my pride insisted I not be the first, either.

Janice Blump, called Blimp when she wasn't there approached me. "I'm so sorry, Heather. When they told me you were out, I didn't know what to do."

Heaven forbid that she let me know. I opened my mouth to say something sarcastic, but realized she was the only semi-friendly voice I'd heard. "Things change."

I had to agree this was a surprise. What was even more depressing was that only Janice and I seemed to notice.

The Country Club meeting room was only a couple hundred feet from our eighteenth-hole home, in Texas, in September, it might as well be a thousand miles. Of course I drove, cranking up the air conditioner in my Escalade as I covered the short distance from parking garage to parking garage.

To my annoyance, my garage door opener didn't work. Richard, our handyman, must have neglected to change the batteries.

When my key didn't fit the front door, though, and Maria, our housekeeper, didn't open the door when I rang the bell, I pinched myself, hard. Had I slipped into one of those nightmares where everything went wrong?

I got back in the car, turned up the air, and called Martin's ever-efficient secretary.

"Hi Betty, it's Heather. Would you put me through to Martin?"

"I'm locked out of the house, Betty. I need him." And since when had she called me Mrs. Montag? Betty and I gone first-name years before.

A dead silence told me I'd been put on hold. Betty was probably off getting things done. Martin's admin was a lot like me in that respect--always has more irons in the fire than just about anyone else. After a moment, the phone clicked. "Someone will be at the home shortly, Mrs. Montag. Please wait there."

"Will there be anything else, Mrs. Montag? Things are quite hectic here."

She'd always had time to chat with me before and Martin hadn't said anything about major acquisitions or executive deals, but then, he wouldn't. And come to think of it, he had been even less talkative than usual during the previous couple of weeks.

My instincts warned me that something was wrong. Could the League meeting only been the beginning?

Betty hadn't been lying. Not exactly.

Three minutes after our conversation, a navy blue Hummer pulled up and Gary French, Martin's Corporate Security Manager, got out looking very professional in his navy pinstripe suit.

"Hey, Gary. You didn't have to come all the way out here yourself."

"Anyway, I'm really embarrassed about this but my key doesn't seem to work."

"What's with all the formality? I've been Heather to you ever since we met." Gary had been in college with Nick, our eldest son, and Martin had hired him directly after graduation, at the same time he'd hired Nick.

I stepped out of my car and pulled the house key off the ring. Gary plucked it from my hand and handed me a large manila folder.

"It is my duty to serve you with these papers, Mrs. Montag. I'm very sorry."

I shrugged. "If this is corporate stuff, why don't you open the door to the house and I'll get you a margarita. You can wait while I sign them."

I'd been Corporate Secretary until a few months earlier when Martin had decided it was taking too much of my time. I'd ended up signing about a hundred documents every night, everything from high-powered SEC filings to changes in toilet paper acquisition. It had been a silly formality, really, but my father had insisted on it back when he'd given Martin the money he'd needed to start the company. I could just as well have given Martin a rubber stamp with my signature on it, but he said there were government regulations and that kind of stuff.

"Oh. Well, come on in anyway and visit. I've hardly seen you for the past couple of months."

"Read the papers, Mrs. Montag. Then you'll understand." He practically ran back to the Montag Industries Hummer and took off.

"But the door" I stopped because I was talking to nobody. I wasn't a kid, but I wasn't old enough to stand on the side of the road and babble to myself without raising some eyebrows. I got back in my car and opened the envelope.

I stared at the top sheet for a good two minutes before my brain processed what was happening.

Martin was divorcing me?

My humiliation at the NTRWL made sense now--everyone else must have known. We'd just see about whether Martin could get away with that.

We hope you've enjoyed this excerpt from MIDLIFE MURDER by Amy Eastlake. To purchase the entire eNovel (in HTML, Adobe Acrobat PDF, eReader/Palm Reader, Mobipocket, Sony Reader, ePub and zipped Microsoft Reader formats) for only $3.99, click the Buy Now button below (payments processed by PayPal for your security):