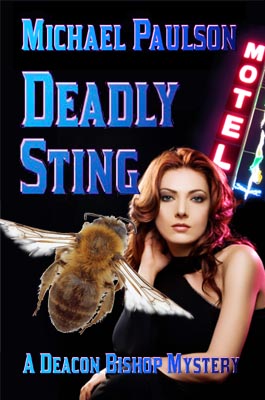 Copyright 2009 by Michael Paulson, all rights reserved. No portion of this novel may be duplicated, transmitted, or stored in any form without the express written permission of the publisher.

This is a work of fiction. All characters, events, and locations are fictitious or used fictitiously. Any resemblance to actual events or people is coincidental.

"I've been trying to phone you for two goddamn days, Bishop!"

I knew him as Peterson Barrows--recently a judge with Travis County Court. It was Saturday afternoon and we were in my office. I was leaning back in my desk chair, wishing I was anywhere else. He was leaning over the desk, railing as if God Almighty had called him to signify.

"I got your messages, Mr. Barrows," I said, when he paused to take a breath. "And if you will check with your secretary she will confirm that I did return your call."

For nearly two decades, Barrows spent most of his time on the Bench either accepting bribes, or offering them. However recent events changed his fortunes. Apparently some vindictive P. I. who shall remain nameless (me), instigated a corruption investigation against Judge Barrows. This resulted in his resignation to avoid facing the public humiliation of impeachment.

"Jesus Christ, Bishop!" He flapped both flabby arms. "If you're going to be in business, get a Goddamn receptionist!"

As a judge, Barrows had been just as pretentious. In fact during his tenure he insisted that all who addressed to him did so by his title, rather than simply his name. Peterson Barrows liked to give the impression that he was the only living judge in all of Texas.

I made a mock beseeching gesture. "I can't find one who'll work for love, Mr. Barrows."

"I had to cancel appointments to come downtown," he continued to bluster. "My clients are important people, Bishop. Time is money for them."

The pompous former-judge stood about five feet three inches tall, and looked nearly as wide. To give his baldness that gently carpeted appearance he combed his greasy, gray mop forward from the last point of growth, near the back of his oddly peaked head. On the plus side, his blue suit looked expensive, as did the crimson bow-tie embracing the goiterous flesh between his silk shirt's collar-points. He wore a new, black belt, its buckle glinting like real gold. The creases in his trousers stood up like machete-blades sharp enough to cut a swathe through any jungle. Barrows's shoes were shiny and black. They were the expensive, handmade kind men in my income-bracket can only dream about. Both of his socks matched, albeit in red argyle. I gave him seven out of ten points for his choice in apparel. I docked two points for the argyles, and one for his open zipper.

"Time is money for me, too, Mr. Barrows." My patience had faded.

I got up and opened the window behind my desk. A honeybee flew in as I settled back into my chair. It buzzed the top of Barrows's head as if the sweet stink anointing the lawyer's mop might be suitable for honey-making.

Irritated by the insect's impudence, the lawyer took a swing at it.

The bee was not impressed and dodged Barrows's attack with little effort. Then, after making another buzzing circle, it casually flew up to the ceiling and perched.

His ongoing pretentiousness irritated me to the point that I blew smoke at Barrows, when he tilted closer. I was hoping he would take the hint and leave. Instead, 'The Judge' remained seated, coughing and fanning the air between us with one pink paw as if I was someone from whose company he could not bear to depart.

"Can't you put that filthy thing out?" he sputtered.

I blew more smoke into his face before chipping, "Peterson Barrows, Esquire. How you must've hated leaving the Bench for a career chasing ambulances, and grieving widows. What happened? Did somebody catch you with your hands full of mob-money, and tell the news-services?"

He thrust an accusing finger at me. "I don't have to take unfounded accusations from the likes of you!"

"In my office you take what I dish out, Barrows." I enjoyed my success at bringing a purplish glow to his sallow jowls. "Don't let my bad manners keep you from appointments elsewhere."

His fat jaws snapped shut with a resounding crack, like a bulldog's on a newfound-bone. Then with a guttural roar he sprang his great bulk from the chair like a fat monkey leaping from a limb.

I simply stared at him and, after a moment of indecision, Barrows settled back into the chair he overflowed, growling, and cursing under his breath.

"You should see a doctor," I suggested. "Maybe he can do something about your blood pressure. Right now your face matches your tie."

"Dammit, Bishop! I'm not asking you to investigate the disappearance of Jimmy Hoffa."

"That's the problem, Mr. Barrows," I snorted. "If you were, I'd be interested. I'm pretty sure I know where the bastard is buried."

The lawyer flushed to the ears. Spittle dribbled from one corner of his wide mouth as he choked for control. "It's an easy goddamn job! It requires three simple tasks. First, you meet flight 267 at Austin airport. It arrives at eleven o'clock, this Friday. Second, you follow one of its passengers until she stops for the night. Third, you telephone my office and leave a message as to where that passenger is staying." His stubby arms splayed, then. "That's it. How much simpler does it have to get, for Christ's sake?"

I gave him more smoke. "I'm still not interested. But I'll be happy to recommend somebody."

He slapped one fat palm upon the desktop with an echoing crack. "Dammit! I want you to do it!"

The lawyer jerked upright, his thick, gray brows crowding the bridge of his big nose. "What in hell does that mean?"

"You picked a bad time to cut in."

"I've got a case, Mr. Barrows. You'll have to find someone else." I was low on cash and unaccompanied by prospects. But who am I to pass up a chance to tell a small lie in order to irritate a man I grossly disliked?

Peterson Barrows slumped against the back of the chair. "Jesus Christ on a fucking crutch! We're talking about one goddamn night's work! It requires that you only..."

"No need to rehash that point, Mr. Barrows," I interrupted. "It changes nothing."

"I don't have time to check out another man, Bishop!" Barrows eyed me like a hungry Bass pursuing a retreating Perch. "Look. I'll pay double your rate."

I quickly snuffed out my cigarette in the ashtray on the desk, and grinned at him. Never let it be said that Deacon Bishop allowed greed to become an uncommon consort during dealings with clients of low repute. Particularly, if those consorts are foolish enough to pay twice what the job is worth.

"Sounds like we can do business, Mr. Barrows." I dragged a yellow notepad from the desk's center drawer and took out a pen. "What's the subject's name?"

He withdrew a brown banker's envelope from inside his expensive suit, and tossed it onto the desktop. Then he pulled out a fat black wallet and snared five one-hundred-dollar bills from its glutted interior.

"Everything you need to know is in that," he declared regally, dropping the cash on top of the envelope. "I want two things clear, Bishop: She's not to know she's being followed. And nobody--and I mean nobody--is to know you're working for me."

"As far as the latter is concerned nothing would please me more."

I set aside the cash and opened the envelope. It contained a check made out to me in the amount of $500 and a snapshot of a redhead--the type of woman dirty old men like me dream about on cold, rainy nights. She was about twenty-five, possibly a model. She had a high freckled forehead, playful green eyes, prominent cheekbones, delicate nostrils, and a provocative mouth. I let my lusty imagination run rampant for a moment, considering the possibilities of her lipstick getting smeared on my favorite body-part.

He returned the wallet to its keep. "She already suspects she's being watched, so stay sharp."

"After seeing her I have to admit I lied about what pleases me most, Mr. Barrows. I'll take an eight-by-ten glossy of her on a bearskin rung with several hundred wallet-sized in a variety of naughty poses. I'll use the little ones to paper the ceiling above my bed."

A flash of malevolent fury twisted the former judge's countenance. "Get your mind out of the gutter, and turn it over."

Reluctantly, I did so. A handwritten description glared back at me: height, weight, hair-color, skin-tone, hobbies, education (which included mention of a Ph.D. in Entomology and an M.D.), food preferences--everything except her name.

"I'd never have pegged her for an egghead who likes bugs and gives shots." I looked up at him.

"Just follow her, dammit!" He squared his shoulders with renewed contempt.

I picked up the cash and fondled it, trying to control my temper with homespun common sense. When that failed, I did a mental toss of the dice. Heads, I would reach across the table and slam-shut his lights. Tails, I would keep the money. Lucky for Barrows I got tails--which promptly refocused me on her and that mouth of hers.

He stood up sharply. "What in hell for?"

"If nothing else, I'll have to call her something when we communicate," I casually replied.

The lawyer's gimlet eyes shrank to pinpoints. "Just refer to her as Miss X."

I had an impulse to grab Barrows by his fat neck and make him eat the photo. But a second toss of the mystical dice gave me tails again--and more fantasies about her. So I pasted a grin upon my puss and pocketed the cash.

"How can I reach you?" I asked

He took a business card from his vest pocket and tossed it upon the desk.

I picked it up. The card was ivory in color, imprinted with his name, office-address, and telephone number. The typeface was some sort of fancy script. The ink was gold-colored. The paper smelled of chocolate.

"My secretary's name is Natalie Parker," he declared. "If you need anything contact her."

Between their curtains of fat, Barrows's eyes quivered with disdain, as if they beheld me as a pornographic photo in a silver frame. "Look! It's a simple Goddamn job..."

His voice caught in his throat as the honeybee dropped from the ceiling with a vengeance. This time it buzzed directly to the end of the lawyer's bulbous proboscis, and buried its stinger.

Barrows let out a scream. Then he slapped his throbbing nose with both hands, trying to drive the bee away. The bee hit the floor amidst an outflow of blood from both of Barrows's nostrils, the crimson flood spewing across his face and clothing.

"I'll be in touch regarding Miss X, Mr. Barrows," I told him, smiling at the lawyer's misery. "But were I you, I'd do something about your blood pressure. You damn near exploded just now."

I went home, fixed a tuna sandwich for supper, and then went to bed. I was not tired--I intended to spend the night in a dream where I chased a redhead who wasn't supposed to know she was being followed.

We hope you've enjoyed the opening chapter from Michael Paulson's DEADLY STING. You may purchase the entire eNovel, in HTML, Adobe Acrobat PDF, eReader, Mobipocket, Microsoft Reader, Sony Reader and ePub formats by clicking the Buy Now button below (transactions processed by PayPal for your security). The entire eNovel is only $3.99.