TO KILL A JUDGE 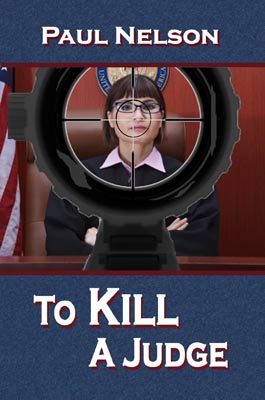 REVELATIONS, 6:8 "And behold a pale horse:

and the name of him who sat on it was death, and

Hell followed with him."

Sighting down the barrel, Matthew squinted into the scope, through the crosshairs onto the front door where he was certain the Judge would shortly appear; she always did. 7:10 a.m. The door would open at exactly 7:15 a.m. and she would come out on the porch in her white terry-cloth robe, bend over and pick up her morning newspaper.

He ignored his racing pulse, focusing on his duties. Refusing to allow the wrong questions to enter his mind, concentrating only on the necessities of marksmanship. Still, his mind wandered, so he deliberated on what he was doing and how he had gotten to this point.

He adjusted his scope, a Bausch & Lomb Elite 4200 with a 6X36 Matte: an expensive one and very precise. His rifle of choice, a Ruger semi-automatic 22 with a single 15 round clip. Carrying no spare clips was natural for him. Just as with his last five victims, he brought only what was necessary to the crime scene. The one full clip he had was loaded with Stinger 22 long-rifle hollow point bullets. In reality, he knew that one bullet should be more than enough for his purpose.

Come on, Judge! Come and get it. I've waited ten years for this moment. Your time has come.

Inside his head was a cacophony of sound, a tremendous roaring, as if he were standing in a cave under a giant waterfall. Having waited far too long to be put off by imaginary noises, he shook his head hoping to clear it and quiet the distractions.

Concentrate. Only a few moments to go. Almost there.

All in all, Dr. Matthew Hightower was a man of many talents. During the last ten years his talents had been honed, refined and conditioned by a searing hatred. His entire being had focused on revenging the wrongs six individuals had heaped upon him. Five were now disposed of. Only one victim remained.

Uncharacteristically and totally against his will, his mind wandered to Marilyn and the girls. What would they think if they knew that he was a murderer? What kind of husband could kill a judge? What kind of father could kill an unarmed woman in cold blood? They knew nothing of his other victims. What if the unthinkable happened and he got caught? No 18 years this time. Nope, this was old sparky, straight up.

My God, Matt, get your act together! She'll be out in a moment. Feel the fire in your guts. Put it out! There's no other way! For God's sake, get a grip!

Blinking the sweat from his eyes, he looked at his watch. 7:12 AM.

He focused on the mailbox under which the newspaper lay in the curled up arms of the black wrought iron holder. The rifle sights were perfectly set; he had tweaked them himself, dead on target at 100 yards. Perched, about 10 feet off the ground in a seated position with a solid limb in front for a gun prop, he was situated almost exactly 100 yards from the Judge's porch. It was a clear shot from the perch to the Judge.

Cold and bruised from sitting on the hard bark of the limb, his ass hurt severely and his legs were totally numb from lack of circulation; still, he did not shift his position. No telltale motion would give him away before he completed his deadly task.

7:15 am. Judge Alice Dana opened her door. As she did every morning, she stopped to smell the fresh air, breathing it in deeply as she looked around, absorbing the peace and tranquility of the country area she had chosen for her home.

No longer feeling the pain and numbness of his long wait, Matt blinked the sweat from his eyes for the last time. All visions of Marilyn and the girls receded into the recesses of his mind to allow total focus on the job at hand. Shutting down all questions and concentrating, his finger began to take up slack on the trigger. He took a deep breath, let out half of it, and gently squeezed. Through the scope he centered the crosshairs on a space at the top of her nose, precisely between Judge Dana's unsuspecting eyes.

"Will the defendant please rise."

Rising to his feet, Matt was flanked on both sides by his attorneys.

God, I hope she's seen through this farce.

Looking at Matt and his attorneys, Judge Alice Dana focused her eyes on the defendant, Matthew Hightower and pronounced: "It is the decision of this court that you be sentenced to eighteen years in the Florida Penal System, said prison time to be followed by five years probation."

Gasping for air, Matt felt like he had been kicked in the chest by a bull elephant. Eighteen years! Dear God, I'll be an old man and Marilyn will be a white haired old woman! Eighteen years!

His bowels turned to water and it took every ounce of mental and physical strength he could muster to keep from spewing brown liquid down his pants, right in the courtroom. Even his concentration on his urethra and sphincter muscles did not prevent a few drops of urine from staining his shorts and darkening the front of his blue trousers. Legs filled with jelly refused to hold him steady and he leaned against Sam as his pulse raced and sweat began running profusely down his face and armpits. His mind swirled in a fog of confusion. What had brought him to this?

We hope you've enjoyed this excerpt from TO KILL A JUDGE by Paul Nelson. To purchase the entire novel in HTML, Adobe PDF, ePub, Kindle/Mobipocket, eReader or Microsoft Reader formats, click the Buy Now button below (processed by PayPal for your security). The price is only $3.99.