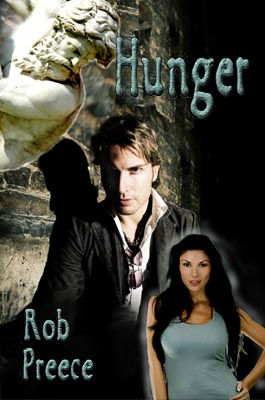 Hunger hit like an icy spear through his gut.

Ewan shuffled forward behind the bent gray men. To him, they reeked of sweated alcohol and death.

He gripped his cheap plastic plate as they held theirs--his need was no less than theirs but his patience was trained by more bitter years than they could imagine.

Five still ahead of him. Now four.

He fought the compulsion to stare at the woman. He couldn't afford to frighten her, but need nearly shattered him.

Finally, he stood at the front of the line.

"Welcome to the Sisters of Faith Kitchen." Her soft Midwestern twang would have made her stand out on the east coast even if she'd lacked the glow of energy. "I haven't seen you here before, have I?"

Ewan shook his head, but his eyes never left her.

This woman could fill a hunger as vast as the empty space between galaxies.

Her brown hair glinted with golden highlights. Her deep brown eyes glistened with sympathy for his plight and that of the other homeless around him. Although her abundant curves, visible despite the baggy long skirt and apron she wore, might not be completely stylish, they suited her, pleased Ewan. A scattering of freckles across her nose showed she hadn't completely left the country behind her when she'd moved to New York City. The pulse in her neck beat strongly with life and strength.

Ewan's knuckles, already pale like the rest of him, whitened on his tightly gripped plate and he forced himself to relax--he couldn't let her run now. But his hunger raged.

The woman's lips quivered just slightly as she smiled.

He inhaled deeply, gathering the woman's scent of flowers and female over the rancid stenches of unwashed males and fatty, congealing gray mounds of food she and the other women served with salt and compassion as spice.

The woman's faith splashed abundantly, like water spurting from a geyser. Its power teased at him, but filled him as little as would the small gray mound, nominally food, she heaped on his plate.

She was looking at him and he realized she was still waiting for him to answer her question.

"I haven't always been homeless." Even to himself, his voice sounded rusty, unused.

"There's no shame in it." The woman handed her apron to another worker, plucked at Ewan's sleeve, and tugged him toward one of the tables.

"Guys, I want you to welcome a new brother."

She didn't ask for Ewan for his name--the homeless and destitute often have reasons to clutch their names tightly to themselves. Giving a true name yields power to others. Anonymity can sometimes protect those with no other defenses.

Faded men, a mix of races and nationalities glared at him as he approached the table.

Fear collided with hunger. Did they recognize him as different? Alcohol, drugs, and insanity might separate them from the rest of the population, but those same things altered their perspectives, let them see what no normal person could imagine. But no, they begrudged him the food and the woman's attention. The world offered so little to the truly poor and hungry that they hoarded what they could.

Finally, two of the men shifted, opening up a space large enough for Ewan to squeeze into.

One of the men, a tall man whose tanned complexion and substantial muscles with more than a bit of fat made him stand out from the others held out a scarred hand. "They call me Big Red."

Intelligent gray eyes stared out from beneath Big Red's bushy white eyebrows. His head gleamed bald where it wasn't covered by a grimy, Russian-looking hat. If Big Red had ever been a redhead, he'd left those days behind decades earlier.

Ewan wasn't used to human touch. He consciously relaxed himself, ungrit his teeth, and managed the briefest possible handshake.

"You're cold as ice, brother. I'll scare you up some coffee." Big Red turned toward the woman, already heading back to the serving line. "Hey, Tia, be a pal. My man here is near-freezing to death. How about getting him a cup of coffee?"

"No problem." Her smile lit the room. "Cream and sugar, right?"

Ewan shrugged, then nodded. Coffee and calories could do nothing for the cold and hunger in him. Still, a mug would do as a prop, and would bring the woman, Tia, back again.

"You don't talk much, do you?" Big Red demanded as Tia hurried away. "You've got to get over the pride thing. Being on the street doesn't mean you're a loser. You just don't have a regular home. One mistake, getting sick at the wrong time, and lots of other people would be here instead. It's not us who've screwed up, it's society."

Ewan adjusted the plate in front of himself and arranged his arms protectively around it. The soup kitchen didn't give seconds, and anyone who lost his meal would go hungry. More than a few faces at the table looked disappointed. They'd hoped to take advantage of the new guy. Two looked more than disappointed--they looked angry.

He ignored them and turned to the man who wanted to befriend him.

"I guess they call you Big Red because of your politics, not size or color."

The big man laughed easily. "For sure it's not my hair." He removed his furry hat and ran a hand across his smooth dome. "Was a student activist after doing a hitch in 'Nam. After that, I never looked back. Most of the guys I hung out with back then sold out. Sold out or are dead. So far I'm admitting to neither."

Tia appeared at Ewan's shoulder, a Styrofoam cup of steaming liquid in her hand.

"Cut the new guy a break, Red." She patted Ewan lightly on the back. "He needs something to eat and drink, not political slogans."

Tia's simple touch warmed Ewan far more than the coffee would. He barely resisted the urge to seize her now. But it was too soon.

"The great socialist leader Jesus said it best," Big Red opined. "'Man does not live by bread alone.' If I don't help the new guy, who will?"

"Jesus was not a socialist," Tia insisted.

"Read the Bible lately? Listen to what Jesus says, not to what others say about him."

"That's something no man can truly say."

Big Red didn't know it, but Ewan was no human. And he didn't need help, exactly, but he definitely had needs.

Big Red and Ewan both watched Tia as she walked back to the counter. Every man at the table wanted her. Ewan craved her more than he had words to describe.

"Wish I was thirty years--hell, ten years younger," Big Red told him. "A woman like that--oh, my."

Ewan nodded. Human lives flickered by so quickly, like single frames in a video. By the standards of the street, Big Red was ancient, but to Ewan the man seemed little more than a newborn.

"She's not for the likes of me," Big Red continued. "Not for Sam or Hank, either." He nodded down the long table at two of the men who'd refused to move when Ewan had approached the table.

"If either asks, maybe she'd go out with him." Ewan didn't need magic to see the loneliness that rode Tia like a jockey.

"Those two? They're the taking kind."

Which described Ewan as well. He'd take what he needed if he had no other choice. He wondered, though, if the sense of danger that had roused him from his long sleep had been only those two homeless men conspiring against Tia.

Ewan watched Tia for the next half hour as Big Red tried to raise his political consciousness.

That little distraction barely helped him ignore the hunger that clawed at his insides like a weasel trying to escape. The food and coffee helped not at all. He needed the woman, needed to consume her essence--and he wouldn't let anything stop him.

We hope you've enjoyed this free excerpt from HUNGER by Rob Preece. This entire novel is available in multiple electronic formats for only $3.99. To purchase the complete novel, click the "Buy Now" button below: