(This is an excerpt of the complete collaboration) 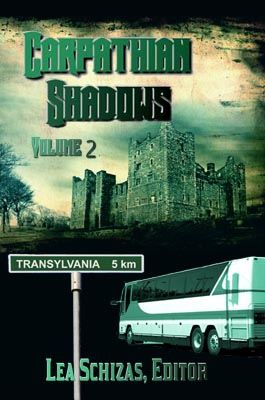 No portion of this work may be duplicated, copied, or transferred without written permission of the publisher

Vampires, werewolves, zombies. . . all legendary creatures hunting their preys, all containing their own personal tales and backgrounds.

But the most evasive story to be told is that of Lord John Erdely from the Carpathian Mountains in Transylvania, Romania.

Lord John Erdely lived in the 17th century and date of death cannot be confirmed since no body has ever been found. It is rumored, but no documents support this theory, that he dealt in black magic to suppress the ongoing collaboration of the churches to bring a unified religion to all people, a Greek Catholic practice.

It is also rumored he may have used black magic to contain his servants, to blind and deafen them from words spoken to them while on errands for the Lord within the village of Cornifu. Villagers became increasingly suspicious of Lord Erdely when family members went missing.

All visitors staying in Cornifu Hotel are surprised with a mystery invitation for a one-day excursion to Erdely Castle. Befuddled but amused at the same time, they accept, unaware of the events to follow.

Join our characters as each discovers secrets and mysteries that will change their lives forever.

I hope you enjoy Volume Two of THE CARPATHIAN SHADOWS as much as I did. The stories trick you into thinking you understand what's going on--let you think that the characters are entering a different world once they reach Lord Erdely's castle. Alert readers will be rewarded, though. Is the small hotel in Cornifu really as simple as it seems to be? Why does the tourist bus seem to have a different group of tourists with every trip--or is it really only one trip? And who is the mysterious and ever-bubbly 'American' tour leader, Jennifer Brooks? Lord Erdely, too, seems to take different forms, as if the present can alter the past itself.

Only one thing is certain as we enter the shadows of the Carpathian Mountains--and the bloody history that they represent: nobody getting on that friendly tour bus will emerge unchanged.

A Visitor From the Past

By Carol A. Cole

"Mr. Collier, there's mail for you." The hotel Cornifu desk clerk waved an envelope at Rob as he and Anna entered the small hotel lobby.

"Who knows we're here?" Anna pulled a scarf off her hair.

"Maybe someone from the office. You know how Adam is. Only working vacations for Williams and Company employees." Rob took the letter and they headed for the staircase.

"But it's our anniversary. Even vice-presidents deserve some down-time." Anna snatched the letter and stormed up the steps to their room.

Rob stared after his wife of twenty-five years, his college sweetheart. This was their long-awaited vacation to all the out-of-the-way cities in Europe. He and Anna had talked about and planned the trip for five years, but she seemed different lately. She wasn't excited about the older hotels they'd booked or talked about the next city on their list.

Anna had been quick-tempered with him and their two dogs ever since she returned from a business trip to Germany fourteen months ago. She'd even had her waist-length hair that he loved since the day he met her, cut off on the trip. Always before, she would brush it out at night, sitting on the edge of their four-poster bed. He loved to see it splayed across the crisp white pillowcase while she slept. "Why did you get it cut so short?" he'd asked.

"It's too much to bother with," she'd snapped. Later, she apologized. "This last trip was just too tiring, although I did visit a wonderful Cathedral in Bonn. I wish you could have seen the stained glass windows. It was breathtaking. It took several decades to complete."

Rob hoped this trip would rekindle their relationship.

Rob entered their room and spied the letter tossed on the bed.

Anna stood at the window gazing at the mountains in the distance.

"You okay, hon?" He gently rubbed her shoulders and upper back.

Anna stiffened slightly then leaned into his body. "I'm just tired. Maybe we can turn in early after dinner tonight. I'm looking forward visiting the cathedral in Brasov tomorrow. Did you know work stopped on it several times and it wasn't finished until 1654?"

Rob kissed her gently behind her left ear, a particularly sensitive spot, but Anna didn't respond. He sat on the bed, tore open the envelope, and read the letter aloud.

We cordially invite you for a free tour within the famous castle of Lord Erdely.

Our guide, Jennifer Brooks, will be departing tomorrow at 8am sharp from Hotel Cornifu for this one-day excursion we have planned.

Visit the mysterious surroundings of the Erdely Castle and see for yourself if it is indeed haunted.

Yours truly,
Bruce Campbell
President of The American Paranormal Association of World Tours