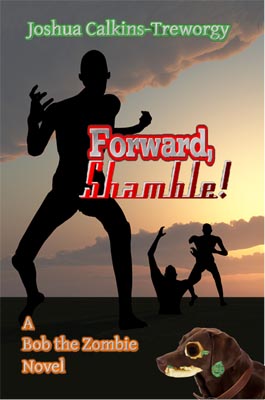 A BOB THE ZOMBIE NOVEL

A BOB THE ZOMBIE NOVEL

Copyright 2008/2009 by Joshua Calkins-Treworgy, all rights reserved. No portion of this novel may be duplicated, transmitted, or stored in any form without the express written permission of the publisher.

This is a work of fiction. All characters, events, and locations are fictitious or used fictitiously. Any resemblance to actual events or people is coincidental.

Through twisted, darkened corridors my mind did stalk, my body all the while trudging faithfully onward without stop or hesitation. There had been a Carhardt store along the road a way back. We stopped there, me and mine, for a hopeful nibble and, in my case, some fresh clothes. We got both, thankfully.

There were some folks holed up in there, and they didn't take too kindly to our arrival. They were armed, of course, and they did not wait for us to fall upon them. The roars of gunfire cried out, anguished, tortured sounds full of despair and blood. The stench of gunpowder and rot filled the enclosed space, an invisible shroud covering all. Pistols comprised the majority of their defenses, but one fellow wielded a shotgun that ripped a nice-sized hole in the guts of one of my traveling companions.

But our sheer numbers, as we poured inside, were too great for seven frightened people, most of whom were clearly new to the idea of firearms. We ripped them apart in less than five minutes, blood flying in all directions. As I stood to one side of the carnage, contemplating a nice black duster, one of my compatriots tossed something in my direction. It landed with a meaty thump just to my left leg.

It was a muscular left arm, torn clean from one of the victims of our onslaught. I stooped over, lifted it, and started gnawing on it as I looked over the selection of dusters before me.

I know, you're probably thinking, my goodness! That's revolting! Well, at one time, I might have been inclined to agree with that sentiment, but no longer.

Because I'm Bob. Bob the Zombie. You may know me, friends, as the Motor City Shambler, and my story did not end with my escape from Detroit, Michigan. For a time I stayed in Flint, and I'll get around to talking about why I eventually left that place as well in short order. As some say, just sit back, relax, and take it all in. Especially if we're still lingering around, humans. It's only a matter of time before you meet my kinsmen.

Some Catching Up To Do

Well, well. So much to tell you all about, now that I've settled in here. Where is here? Cincinnati, Ohio, actually. Took a hell of a long time getting here, too, what with the pace of the horde I was leading. They're mostly what you humans have started calling Type A zombies, little more than shuffling, rotting, brain-dead eating machines. There are a couple of Type B's in the city, such as myself.

I know the labels because one of our Type B's was a lieutenant in the Army National Guard. He's got a lot of communications equipment up in his place, and he's intercepted a number of military messages back and forth between units coordinating attacks on those areas my kind largely have pinned down under our control. He lives (ha ha) in the top floor of the Marriot Hotel downtown, along with three other Type B's, all of whom had been privates. We're diversifying.

He had also been privy to the information about tagging us with different labels while he was still a human being, a small bit of the human memories that remained with him. As for the privates, he doesn't give them orders or anything like that. Rank is largely an outmoded concept for us. We're beyond such pettiness. We Type B's don't horde supplies of food or information. All undead are equals. The Type B's are just more intelligent and able to function than the Type A's. I grieve the loss of either type to the humans equally.

Suffering is not prejudiced. Why should I be?

I believe it's worth mentioning now, for the next generation of humans who may find these documents in future years, that as of this writing, the world balance has tipped, however temporarily, in our favor. We outnumber you, though not enormously. Your militaries are in chaos and disarray. Due to a moment of supremely piss-poor judgment on the part of Cuba's leaders, Cuba is no longer going to be on any maps. Rather than surrender themselves to becoming members of the undead, or give their homeland over to my kind, that country's naval leaders bombarded the entire country with missiles and bombs until the whole damned place was nothing more than a few dozen square miles of floating debris in the middle of the ocean.

The ocean got a little bigger, thanks to the evaporation of so much land. I wonder how the aquatic life will handle the aftermath.

Japan is little more than a mass cemetery. Without a source of food, most of my kinsmen there have keeled over, having gone over a month without sustenance.

England, while in ruins, is still chock-full of human resistance against the undead armies. British SAS officers are brutally efficient when dealing with us. British Army regulars have been instructed to shoot themselves in the head if they're bitten or clawed deeply, in order to prevent them becoming more members of the zombie race.

American Marines and Army personnel stationed in the Middle East have purged most of Iraq and Afghanistan of my kind. We gave whole new meaning to the term civil unrest over there, I'll tell you what. Who needs weapons of mass destruction when you have a zombie infestation on your hands, huh?

Australia is much like the States and Canada. A wreck, but the split is roughly fifty-fifty.

Mexico? Largely deserted. However, they're host to the largest population of zombified dogs, who seem able to last longer than the human variety without food.

Television is back up and running, most of it information and news services. Only twenty or so stations are broadcasting anything more than white noise, but that's plenty to work with.

The Internet is down, however.

Currency is a bad joke.

Am I forgetting anything? Ah, yes, the celebrity report. You see, there's a good number of us Type B's who have finally rediscovered our ability to talk. I go over to the lieutenant's place every couple of days to hear reports and updates from around the world, information he gets off of the television and his military communications suite. My favorite report is the celebrity report, when he tells me what famous folks have joined our ranks. He even finds out for me which Type of zombie they've been turned into. Here's a complete list of the last two weeks' names, Types, and where they've been spotted as members of the hordes:

Jeff Foxworthy--Type B zombie. Spotted in Fife, Alabama. I'm not sure there's an appreciable loss of intelligence at all there.

Jessica Alba--Type A zombie. Seen on the outskirts of New York City, which we largely control now.

Tom Cruise--Type B zombie. Warren, South Dakota. If you ask me, he was already a zombie before the infestation, though of a pseudo-religious sort.

Jeff Gordon--The NASCAR champion is a Type A. Spotted in Atlanta, Georgia.

Carl Edwards--Yet another NASCAR superstar, he's a Type A. I'm thinking one of the other two drivers got to him.

Tom Brady--Of the New England Patriots, yes. He's a Type B, up in Boston.

Sir Elton John--Well, no more music for you, sir. Type B in Manchester, England.

John Goodman--I loved him in The Big Lebowski, but sadly, he's a Type A in Paris, France. What he was doing there, I haven't the foggiest.

It has certainly been an eventful time for me, and hopefully for you as well. Hero is certainly enjoying the brief respite we've had in the city. Hero's my dog, a zombie dog, and he's the best friend I've ever had. But I'm afraid for him every time he goes out without me. You see, we haven't taken this town entirely... not yet. There are still thousands of humans popping out of hiding now and again to take the fight to us, only to scurry back into whatever secret place they've kept themselves in. How they have managed to avoid our detection we don't know.

Zombies, if you're reading this as a human, have an innate ability to sense the presence of the living. It is through this sixth sense of sorts that we have been able to hunt you down and make Happy Meals of every one of you we come upon. This is not some arrogant boast, humans. We have only to wait until the time is ripe to lash out in one final, enormous push to do you in.

Personally, I don't mind waiting things out, however. After all, if we wipe you out entirely, we won't have much in the way of resources left to feed upon. We cannot seem to target children, you see, a fact that I have seen proven a number of times, and that makes me very, very curious. What is it, precisely, that keeps us from attacking and feeding on the young? I doubt it's any sense of nobility, though I have myself defended a child once from another of you foolish humans who ran mad. Maybe we're just waiting for them to get older, make them more valuable as a meal? I can't say. I hope to find out eventually, however.

Well, I think that perhaps I should begin by talking about my last couple of days in Flint, and tell you about the epic blunder that was the assault on the rec center. Flint was the town where myself and the other survivors of Detroit wound up in as our first stopover. I don't think we originally intended to stick around for any length of time, but after the carnage that was Detroit, we needed some time to cool off, maybe hunt down some less resistant humans and have a few leisure meals.

That right there was a laugh, since just about everybody in that town owned a firearm or two and knew damned well how to use them. My pack met up with a horde of about three hundred other zombies on the road there, but after dealing with the first wave of human defenders in Flint, our numbers had easily been halved. The work of whittling down their numbers grew easier as time went on, though, and the former defenders of Flint became its assailants.

But I'm getting off track. Let me fast-forward to the last days there, in Flint.

We hope you've enjoyed this excerpt from FORWARD, SHAMBLE by Joshua Calkins-Treworgy. The entire eBook is available in multiple eBook formats for only $3.99. Click the Buy Now button below to purchase it: